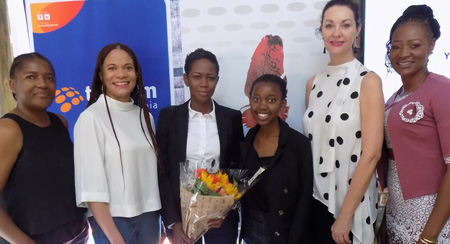 At the last Businesswoman Club breakfast meeting in 2019, long before the Covid lockdown, the seed was planted for the Economist Group to start tapping the power of the digital world through video conferencing and training.

This has now culminated in the Economist’s own Business Centre which is hosted as EconomistToday at https://economist.today. This is an exciting step for the Economist projects which have grown in stature and reach over a 25-year period.

Calling it the next level in digital, the Economist Marketing Manager, Ms Desèré Lundon-Muller said video is the medium of the future, not only for large media empires but across the board for any publishing group that is keen to reach its audience at a time when disruption is the order of the day.

Digital disruption is the name of the new-normal game and the Economist has once again taken the lead, building its own studio and laying the groundwork for regular video broadcasts in the form of conferences and online training.

Watch this video below to see the very first Breakfast Club presentation that was streamed as video in the Economist. The introduction is by Desèré and the presentation by the Namibian Businesswoman of the Year 2017, Nangula Kauluma.